Trump Triumph restoring the Constitution and the Republic while returning power to We the People.
Biden A Completely Fake SOTU?

Our military intel contact said funds were released as Mr Fleming’s sources said this morning Wed 24 Feb at 7:30 am PST and his info also agrees that liquidity was released in Zurich to platforms like Admiral Markets Pty Ltd, an Australian Financial Services company in Sydney (and also to other platforms) yesterday Tue 23 Feb; he confirmed Iraq is set to make public their Dinar RV rate through their budget vote tomorrow Thu 25 Feb;
. ..His info was the same as Juan O Savin’s that the COVID-19 scamdemic lockdown mandates and mask mandates would begin to lift from next Mon 1 March onward, Dr Charlie Ward was told that the COVID-19 scamdemic would be over after the reset; redemption center bankers and staff have been given a schedule for exchanges from now through Sat 6 March;
. ..So he said, “Do the math,” buckle up, it’s moving toward T4B now, he said keep your expectancy level high, keep prayers going and get ready for your appointment for real now.

Patriots are urged to stay off the streets and away from State Capitols — False Flag events intended to discredit patriots are known to be planned. NON-VIOLENCE is VITAL. Obey the law, allow events to play out.

Alert Reader sends in the thought that the SOTU will be completely faked, and these links: 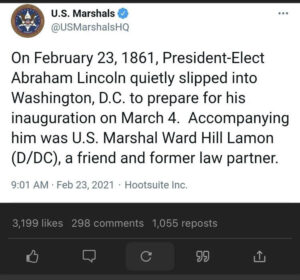 Phi Beta Iota: We do not make this shit up.  See Ezra Cohen-Watkins below on all this being a movie — a Wrestlemania drama.  Everything the Biden Show is doing is designed to show US citizens just how deeply fucked up the Satanic Empire agenda can be.

Yoda: Stephen Hunter at Gab Has Published This, Ostensibly from Ezra Cohen-Watnick — We Believe It and We Trust the Plan

Phi Beta Iota: In service to President Trump, the Constitution, and our public, https://unrig.net is now being built out with a full time person loading posts with links and tags to catalog electoral fraud and electoral reforms in a manner never before done — this is a free comprehensive site for public education.  Subscribe there to be informed, free, of new posts in a single daily digest.

Sign of the Times: Trump’s done playing nice: Reports confirm he is about to declare ‘war’ on Republicans

Alert Reader comments: It is a murder-suicide pact between two political parties but they can’t agree on which one of them will kill themself first. The Democrats took a slow acting poison and the GOP has terminal neurological shakiness and cannot pull the trigger…