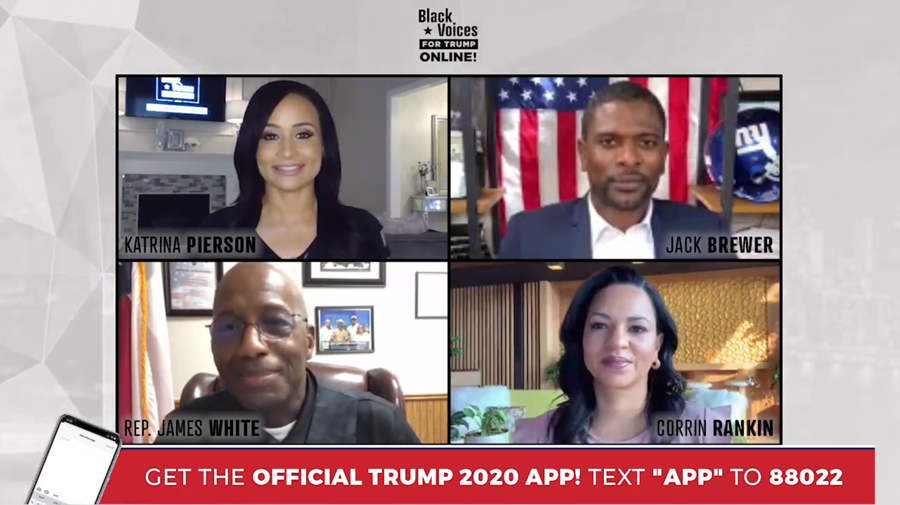 “Only President Trump has consistently supported the Black family and worked to increase Black generational wealth.”

“At the Republican National Convention, we heard directly from Black Americans who have benefited from the Trump Administration’s Make America Great Again agenda and reject the false promises of the left,” said Texas State Representative James White. “As Joe Biden surrenders to the left-wing mob, President Trump is working to restore law and order to our cities.”

“Joe Biden has no plan to address the underlying issues of the Black community, which are largely linked to fatherless homes, failing schools, and mass incarceration,” said Jack Brewer, Black Voices for Trump Advisory Board Member. “We need another four years of President Trump to undo decades of failed Democrat policies designed to hurt Black Americans.”

“While Democrats continue to offer Black voters false promises and fear-mongering, President Trump is working to deliver real solutions to the Black community,” said Corrin Rankin, Black Voices for Trump Advisory Board Member. “We need a president who will work to remedy the underlying problems that Black voters face, not one who stokes fear and division.”

Related Posts:
What Were the Capitol Rioters Thinking?

Byron York, It's one of the most basic questions of the U.S. Capitol riot investigation: What was the rioters' plan? What Read more

In addition to the latest arrest, prosecutors say Thomas Moseley is under investigation in another matter. A man who was twice Read more

Pelosi: The enemy is within the House

New security measures will be enacted due to rising threats against members of Congress. House Speaker Nancy Pelosi said the chamber will Read more