What the heck?! Does a “free and fair election” mean that one side has to secure a court order to allow their legal scrutineers in?

The Trump campaign has not been permitted to send poll watchers to supervise the counting of ballots in Philadelphia, in a state which is one of just a handful that could determine the result of the 2020 Presidential election.

On election night, Trump was leading Biden by around 500,000 votes in Pennsylvania, but other states where Trump was leading saw the lead drop significantly after troves of ballots were counted. This has caused many Trump supporters to suspect that there are some weird shenanigans going on in the counting of ballots. In one case, Wisconsin, which had been leaning Trump, suddenly had an influx of ballots — and an astounding “black swan” instance of 89% voter turnout — the state is now leaning Biden.

They have posted a livestream of the vote counting, but it’s not like you can really see anything from that vantage point.

The Republican poll watchers weren’t allowed to be closer than 25 feet. But they were eventually allowed to use binoculars.

Team Trump thought that was absolute B.S. and got a court order to be allowed to properly observe the counting.

Judge Christine Fizzano Cannon’s ruling, issued Thursday morning, overturns a decision by a Philadelphia judge that rejected a complaint by Trump campaign officials, who claimed they weren’t being adequately permitted to observe the vote count.

Cannon ordered the Philadelphia Court to issue a new ruling by 10:30 a.m. Thursday allowing all candidates or their representatives to “observe all aspects of the canvassing process.”

The representatives must observe COVID-19 mitigation rules for social distancing and must be wearing face coverings, Cannon ruled.

But, no sooner were the Trump scrutineers allowed in, than the Democrats filed an appeal and a judge ordered all counting stopped temporarily to hear both sides. The counting was resumed around noon.

Vote-counting efforts in Philadelphia were temporarily suspended on Thursday following a court order that granted President Trump’s campaign closer access to oversee the operation, according to reports.

The count resumed shortly after noon, the Philadelphia Inquirer said.

The Pennsylvania Supreme Court has not said if it will hear the appeal planned by city officials, the Inquirer said.

It seems like there’s some weird stuff going on in Pennsylvania.

One county has taken a break from counting until FRIDAY.

Allegheny County, PA still has 35,413 uncounted mail-in ballots, but elections staff is taking today off for “administrative work” and will not resume count until Friday. “I can’t get an answer as to why,” says @bethanyhallam, a member of county elections board.

I guess they just “called a lid” just like Biden did for half of his campaign.

Let’s be frank, the leadership in Pennsylvania isn’t precisely “Trump-friendly.”

The Attorney General had posted “if all the votes are added up in PA, Trump is going to lose.” 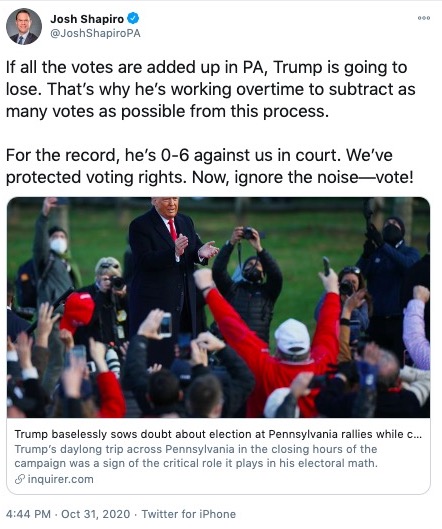 The Pennsylvania Secretary of State Kathy Boockvar who is in charge of overseeing the election is no fan of the President.

Corey Lewandowski is now calling for the enforcement of the court order.

Pam Bondi had said although they have been let in and can be 6 feet from the counting, the machines have been moved further from the poll watchers.

Trump isn’t going to let this go without a fight, and he’s right to keep fighting.

Isn’t that how he became POTUS in the first place?

Buckle up, Patriots! It’s going to be a rough ride.