You are here: Home / News / Paul Pelosi Was Drunk Again, And In a Dispute With a Male Prostitute Early Friday Morning

Paul Pelosi Was Drunk Again, And In a Dispute With a Male Prostitute Early Friday Morning

Oh and don’t forget, the LEFTIST attacker makes hemp jewelry.  Yeah sure, we believe ANYTHING the media or Democrats say.

There is a tiny possibility there might be more to this story than meets the eye https://t.co/HCaF5DrRjP

The Awful Truth: Paul Pelosi Was Drunk Again, And In a Dispute With a Male Prostitute Early Friday Morning.”Paul Pelosi stated that he doesn’t know who the male is but he advised that his name is David and that he is a friend.” Yeah, right. –   read article that Musk read…. and now the world knows

Articles for those who want more info on this deviant…. Democrats sure are a bunch of nut case.

Want more on Paul Pelosi and the fake media cover-up and fake story to attack Conservatives? …. Here you go

Police investigating the Paul Pelosi attack continue to state they *do not know the motive.* Yet liberal “thought leaders” like Hillary Clinton and Jimmy Kimmel have decreed that not only is the motive known to them, but only insane or malicious people would question them.

And Nancy’s public statement on it all – – 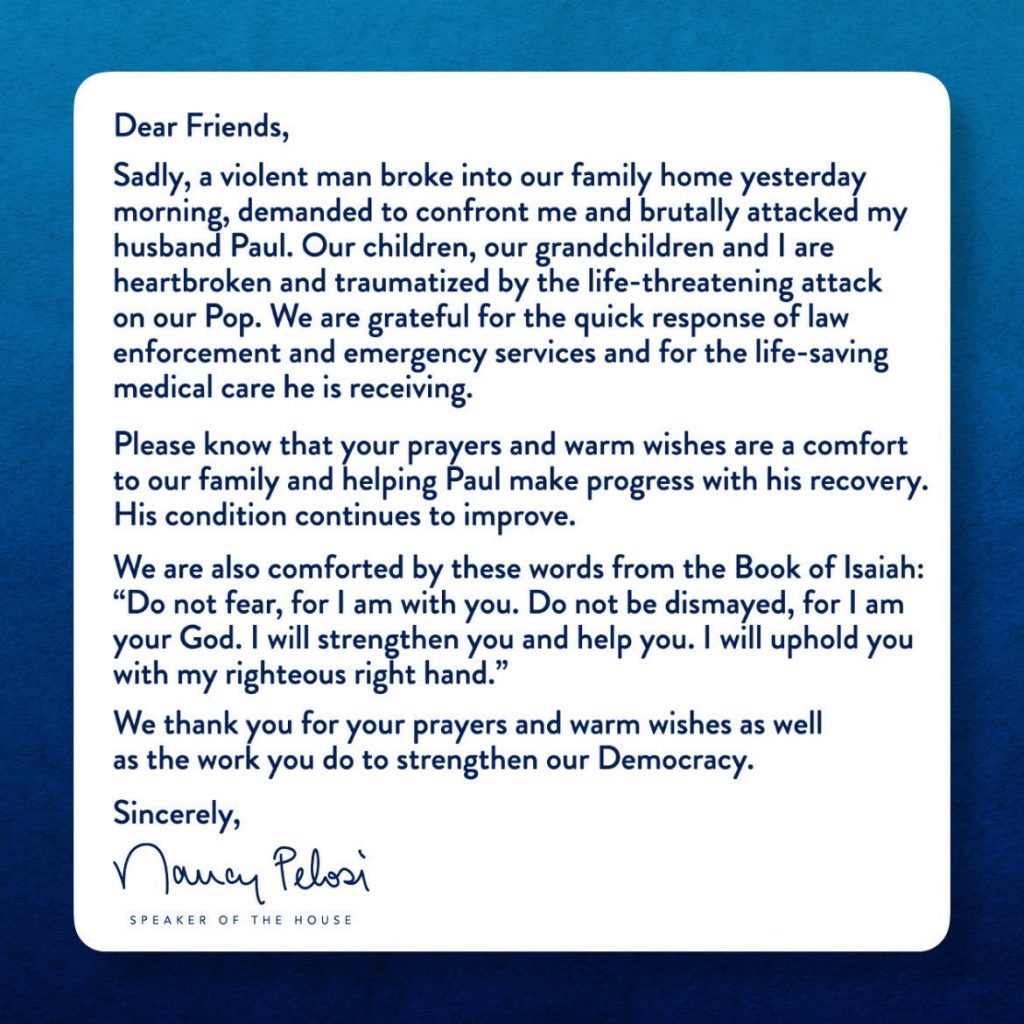 Paul Pelosi’s 911 call reveals he knew the man, his name is David and describes him as his friend.

In the beginning he said he didn’t know him but later, Paul confessed.

The Pelosi’s are not being honest. Retweet so everyone sees this. pic.twitter.com/zRozccWceq

Previous Post: « Shocking Plan of the WHO Exposed
Next Post: Everyone is Laughing at the Ridiculous Pelosi Big Lie »

Daniel Greenfield, "It seemed to me like they were going to burn the truck … END_OF_DOCUMENT_TOKEN_TO_BE_REPLACED

Daniel Greenfield, Celebrations, including fireworks and guns being shot … END_OF_DOCUMENT_TOKEN_TO_BE_REPLACED

David Harsanyi, The first question any reasonable person asks after a … END_OF_DOCUMENT_TOKEN_TO_BE_REPLACED

The 2024 race is far off, but that doesn’t mean the rumor mill stops … END_OF_DOCUMENT_TOKEN_TO_BE_REPLACED