Indictable Evidence for the International Tribunal of Crimes Against Humanity

It all started with the plane crash. More oddities around the Nordstream pipeline

The Dumb and Dumber Administration

Caliphate was a 12-episode 2018 podcast hosted by the Times’s Pulitzer-finalist reporter Rukmini Callimachi. The podcast rose to prominence due to its feature of an alleged Islamic State (ISIS) soldier, Shehroze Chaudhry.

A New York Times press release called it the “most ambitious form of audio storytelling to date.” “Caliphate” prominently featured the story of Shehroze Chaudhry (aka Abu Huzaifa), a Canadian man who claimed to have been a member of ISIS. Chaudhry’s story was full of vivid details. He talked of his time as an executioner for the Islamic State; in one instance he described how blood “sprayed everywhere” after he beheaded and crucified an accused drug dealer. “I had to stab him multiple times. And then we put him up on a cross. And I had to leave the dagger in his heart,” he said. Intense stuff, even for those who have grown somewhat numb to Islamic State atrocities.

However, after Canadian authorities arrested Chaudhry in September 2020 for “hoax-terrorist activity,” the Times was forced to admit Chaudhry’s story could not be verified.

As the Associated Press reported:

Chaudhry’s story fell apart upon further examination. Investigators concluded they couldn’t be sure he’d ever been in Syria and almost certainly didn’t commit the atrocities he’d claimed. Supposed evidence he offered to back up his story, including photos from Syria, were gathered from other sources.

Mark Mazzetti, a Times reporter who led the investigation into Chaudhry, said, “All the evidence that he presented that he went to Syria was either ripped from somewhere else, was inconclusive or just didn’t hold up.” 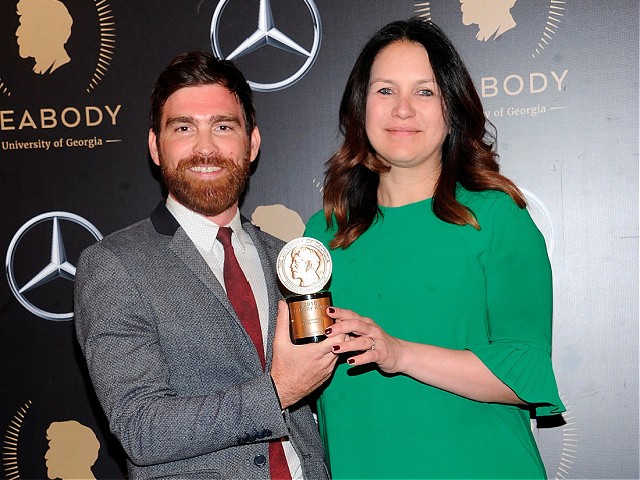 Andy Mills, left, and Rukmini Callimachi hold the award for their 2018 podcast “Caliphate” at the 78th annual Peabody Awards in New York on May 18, 2019. (Photo by Brad Barket/Invision/AP, File)

A key player behind the scenes in getting the podcast off the ground was Kahn, who “anointed” Callimachi “as one of his stars,” according to the New York Magazine. Kahn’s influence in making Callimachi the face of the Times’s Caliphate podcast is undeniable. Kahn reportedly ignored other Times employees who warned of Callimachi’s “sketchy ways,” which paved the way for her to host the podcast.

Kahn reportedly dismissed Callimachi’s colleagues’ valid concerns because he thought those warnings came from people who were envious of her promotion.

The Times eventually returned a Peabody podcasting award it received for the Caliphate podcast and had to preface each of its 12 episodes with an audio correction.

However, the Caliphate scandal is not the only issue with Callimachi, one of Kahn’s “stars.”

In Breaking the News, Marlow details how Callimachi arranged for the New York Times to purchase footage from a terrorist organization with “a known track record of being in contact with several branches of al Qaeda.”

Callimachi also reportedly forged documents during her reporting on the Islamic State for the Times.

“The drama continued to swirl around Callimachi. In October 2019, she detailed alleged payments by the Islamic State to a rival group, Hur- ras al-Din (HaD),” Marlow wrote. “An independent researcher later alleged that the docu- ments at the heart of the story were forged. Some of them, the researcher claimed, even seemed to predate HaD’s founding.”