Get Speaking About News delivered by Email

At least 11 local news stations in the United States were caught airing the same scripted segment about Amazon, and their role during the COVID-19 pandemic. The segment played like a commercial for Amazon, even touting the company’s ability to “keep its employees safe and healthy,” during this difficult time, despite the fact that many workers have been organizing to protest against unsafe conditions and lack of hazard pay.

The segment is even narrated by Amazon spokesperson Todd Walker, who promises an “inside look” at an Amazon fulfillment center

“Millions of Americans staying at home are relying on amazon to deliver essentials like groceries and cleaning products during the COVID-19 outbreak… For the first time we’re getting a glimpse inside Amazon’s fulfillment centers to see just how the company is keeping its employees safe and healthy.. While delivering packages to your doorstep,” Walker says.

The trusted local news anchors who introduced the segment didn’t even identify Walker as an Amazon representative, but instead made it appear that he was one of the station’s reporters. According to some journalists who refused to cover the segment, Amazon sent the video around to a long list of news sources with instructions on how to introduce it.

Zach Rael, a reporter at ABC’s KOCO 5 News, tweeted a copy of the script and said that it was mailed to him by Amazon’s public relations team.

“No. Let us go inside the fulfillment centers with our own cameras…” Rael tweeted.

Just got an email from Amazon’s PR team with a pre-edited news story and script to run in our shows. They are selling this as giving our viewers an “inside look” at the company’s response to COVID-19.

Let us go inside a fulfillment centers with our own cameras… 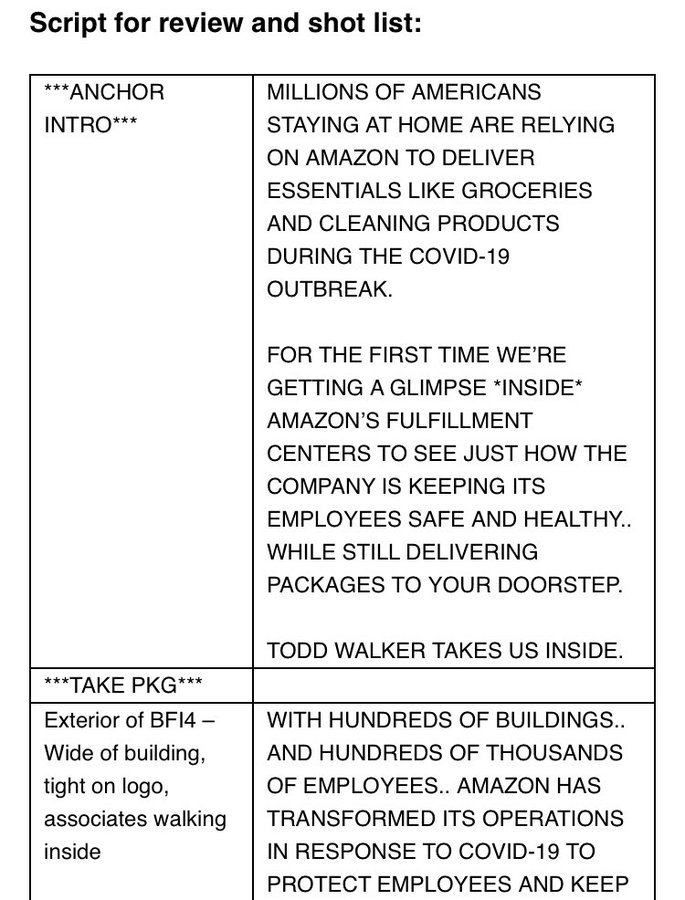 2,762 people are talking about this

There were at least 11 other stations who were willing to play the footage that have been identified so far.

Alyssa Bronikowski, a spokesperson for Amazon, told Motherboard that the video was not promotional, and that the company would invite journalists into their warehouses if it was currently safe to do so.

“We welcome reporters into our buildings and it’s misleading to suggest otherwise. This type of video was created to share an inside look into the health and safety measures we’ve rolled out in our buildings and was intended for reporters who for a variety of reasons weren’t able to come tour one of our sites themselves,” Bronikowski said.

It makes sense that Amazon is going to such great lengths to repair its public image, because it has been facing increasing criticism during the pandemic, especially from its employees. Earlier this month, Vice President (VP) of Amazon Tim Bray resigned in anger over the company’s treatment of employees who have protested against working conditions during the coronavirus pandemic.

Don’t Believe the Liberal Propaganda or Fall for Their Hysterics

Mark Nuckols, If you believe the liberal media, there is really no difference between the police and the Ku Klux Klan, Read more

Chinese State Media Carry Out Pitiful Attack on Steve Bannon, But Why Now?

Is the Media Engaging in a Form of Psychological Warfare Against America?

Michael Brown, A recent article written primarily by a medical doctor in Alabama claimed that, “The way in which the media has pushed Read more