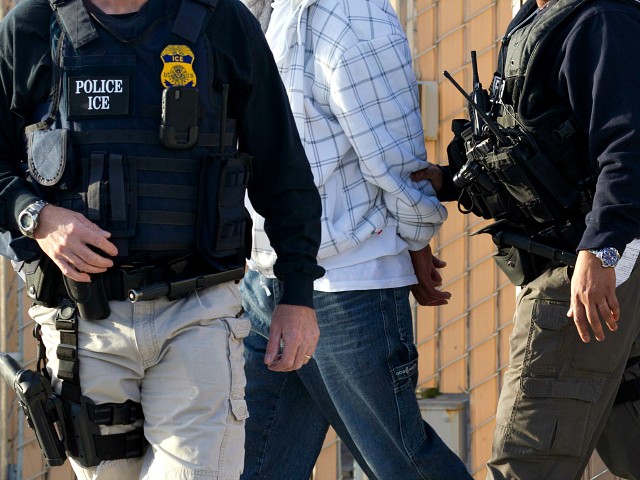 Federal immigration agents are working with the private sector to find some of the many criminal illegal migrants shielded by Democratic-run “sanctuary cities,” according to a report in the pro-migration Guardian newspaper.

The Guardian reported it has reviewed documents that were gathered by open borders advocates, including Mijente, Colorado Immigrant Rights Coalition, and American Friends Services Committee. The documents state that ICE is using LexisNexis and Equifax — “data brokers that collect, access and then sell personal and criminal justice information.”

In February 2021, Ice agreed to pay LexisNexis, the company that offers database services to law librarians, journalists and others, more than $17m to access its real-time “virtual crime” platform Accurint, the documents show. Accurint, according to the company’s website, “brings together disconnected data from over 10,000 different sources, including police agencies nationwide and public records” to give law enforcement a “comprehensive view of people’s identities.”

Four months later, Ice paid for access to Justice Intelligence, a database offered as an add-on service by several platforms including LexisNexis and run by Appriss, a company owned by credit bureau Equifax.

Justice Intelligence provides real-time jail booking and release information from more than 2,800 jails across the US, according to Appriss, as well as information pulled from tens of millions of court records, probation and parole records and offender data. The database updates “as frequently as every 15 minutes”, according to the company. The Justice Intelligence deal would cost Ice an additional $4.8m.

ICE said in the documents it was necessary to use these tools when local authorities will not cooperate with them.

“Due to policy or legislative changes, [Ice Enforcement and Removals Office] has experienced an increase in the number of law enforcement agencies and state or local governments that do not share information about real time incarceration of foreign-born nationals with ICE.”

“Therefore, it is critical to have access to Justice Intelligence. There would be a major operational impact on public safety without these screening tools.”

The development has led some jurisdictions to seek investigations into whether what ICE is doing is problematic.

In 2015 in In Cook County, Illinois, for example, the governor instructed state agencies not to cooperate with ICE. The contract for Appriss prompted county commissioner Alma E. Anayaa to propose a resolution this month to investigate ICE’s relationship with data brokers.

“ICE has published documents that explicitly confirm that they use data brokers to get around sanctuary policies and law,” the resolution reads. “The previous year, Cook county law enforcement agencies had to reject more than 1,000 detainer requests because of local sanctuary policies. Even when localities refuse to execute detainers, LexisNexis’s program, Justice Intelligence, allows ICE to obtain the necessary data to bypass local policies,” it continues.