President Donald Trump’s re-election campaign has repeatedly called into question “voting irregularities” in Wayne County, home to the Democratic stronghold of Detroit. The campaign was delivered a small victory on Tuesday when two of the four Wayne County Canvassers voted not to certify the election results.

In particular, Monica Palmer, the Republican chair of the committee, took issue with discrepancies in the county’s 43 precincts, in particular the fact that the number of absentee ballots counted verses received were not the same.

“I believe that we do not have complete and accurate information on those poll books,” Palmer said.

According to the Detroit Free Press, Palmer would be open to certifying some precincts, but not Detroit and other areas that had unexplained discrepancies.

The Democratic vice chair, Jonathan Kinloch, attributed the differences to “human error” and ruled out the possibility of voter fraud.

The election results are now being sent to the Board of State Canvassers who will decide whether or not to certify the election.

@JocelynBenson
My statement on the actions taken during today’s meeting of the Board of Wayne County Canvassers. 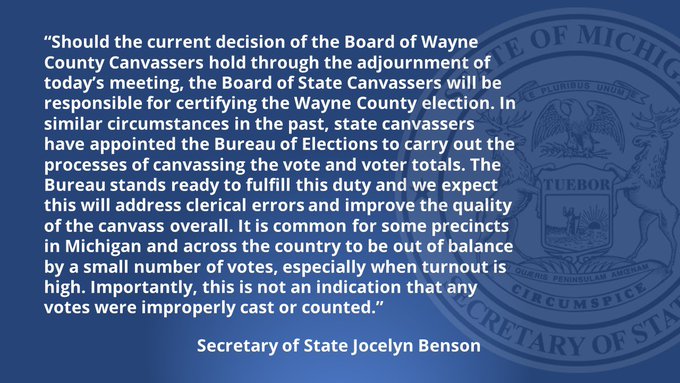 Michigan’s Bureau of Elections stands ready to fulfill its duty to complete the canvas for Wayne County, address any clerical errors and improve the quality of the canvass overall. Importantly, this is not an indication that any votes were improperly cast or tabulated.

“Should the current decision of the Board of Wayne County Canvassers hold through the adjournment of today’s meeting, the Board of State Canvassers will be responsible for certifying the Wayne County election,” Michigan Secretary of State Jocelyn Benson said in a statement. “In similar circumstances in the past, state canvassers have appointed the Bureau of Elections to carry out the processes of canvassing the vote and voter totals. The Bureau stands ready to fulfill this duty and we expect this will address clerical errors and improve the quality of the canvass overall. It is common for some precincts in Michigan and across the country to be out of balance by a small number of votes, especially when turnout is high. Importantly, this is not an indication that any voters were improperly cast or counted.”

Should the Board of State Canvassers toss out Wayne County’s election results, Michigan would flip and become a Trump pickup. Today’s decision puts the Trump campaign on that path.

Related Posts:
The Only Exhibit Trump Needs For The Senate Impeachment

Denise Simon, The Fake Impeachment,  A big hat tip to Molly Ball for her work on this. This is a very long Read more

YES, PRESIDENT TRUMP WON, THE NAVARRO REPORT Executive Summary – The Art of the Steal The Democrat Party and its Read more

Trump Steps up Pressure on Kemp: ‘Do Something’ About Georgia Election

President Donald Trump on Tuesday stepped up the pressure on Georgia’s GOP Gov. Brian Kemp to “do something” to bypass Read more