Diana West, USE BLACK OR BLUE PEN ONLY!

Claims of a specific and blatant voter fraud in Arizona have surfaced on Twitter. This fraud purportedly involves poll workers forcing Sharpie permanent markers onto voters — even to the extreme of taking ballpoint pens out of voters’ hands and replacing them with Sharpies! The substitution, the claim goes, has the effect of invalidating ballots. Further, the anecdotal evidence suggests this was taking place in some Trump-supporting precincts.

Is it true that Sharpies may invalidate ballots? Yes. In fact, while there is a difference of opinion on the matter — confusion is more like it — certain states and organizations have issued guidances or warnings against using them to vote. In a cursory search, I found guidances against using Sharpies/permament markers to mark ballots from the Secretary of State of New Hampshire, articles on voting (even specifically in Maricopa County, AZ) and a GOP woman’s club, also in Arizona. Ink pens are most often the tool of choice.

(Update) “USE BLACK OR BLUE PEN ONLY” says the instructions of what is said to be an Arizona ballot.

An Angel Mom, Mary Ann Mendoza, attested to this Sharpie scheme under way in Arizona on Twitter last night, after which her Twitter account was suspended! 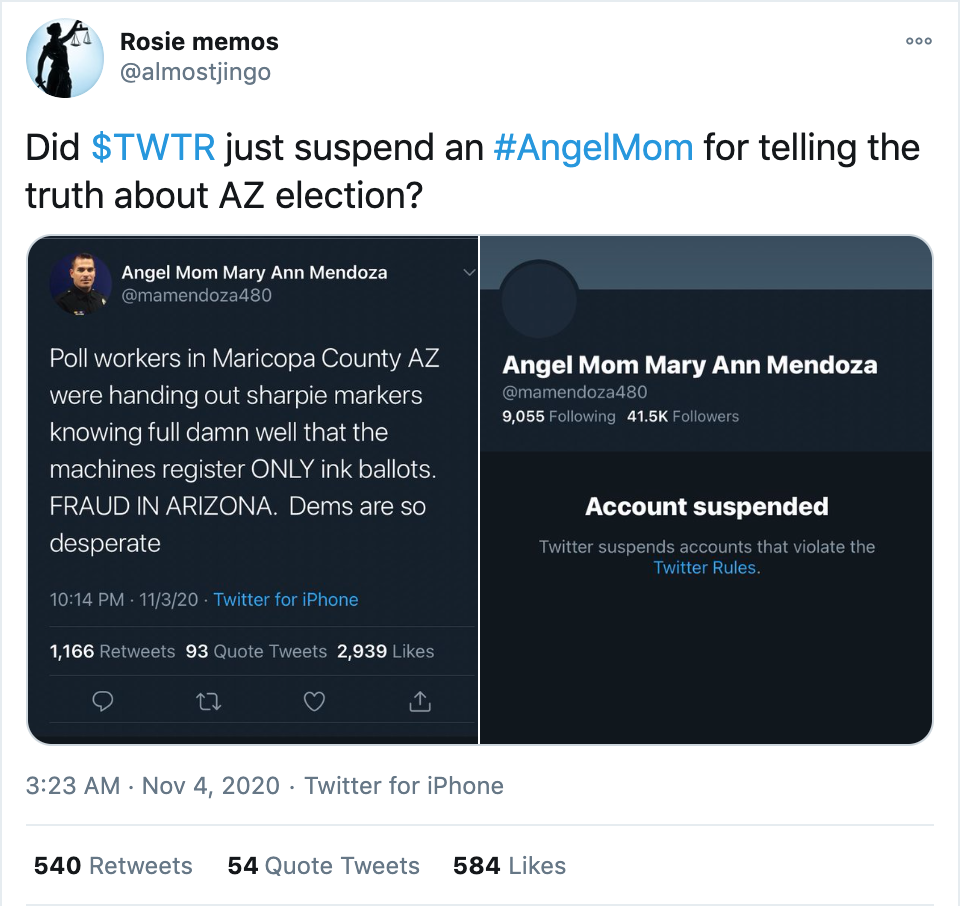 The most complete account I’ve heard is from an on the street interview by someone with the Twitter handle of @AZKayte. In this interview, a young woman in Maricopa County says she witnessed poll workers forcing Sharpies onto voters, including herself. She also claims to have seen two Sharpie-marked ballots refused by voting machines, and then shunted off to the side by poll workers.

Last time I looks  @AZKayte was still “allowed” to function on Twitter. Here is a link to the  video.

The young woman says she threw away the Sharpie she was given and used a ballpoint pen to mark her ballot instead. Her ballot then went into the machine without any apparent hitch.

“They had a bowl of [ballpoint] pens behind them but they not giving them to people, and only giving Sharpies out,” she said.

The young woman goes on to say that she was aware of four other polling places where poll workers were giving out Sharpies (including Queen Creek Library, ASU Polytechnic). The interviewer interjects, “They’re invalidating votes is what they’re doing.”

It gets crazier. The young woman says that the director (?) came out and yelled at her three times about the matter, while the interviewer says, “they called the sheriff and told us to stop handing out ball point pens.”

Who is that sheriff? Who are these poll workers? Where is law? Where is order?

I have seen other Sharpie accounts, include the following:

I voted at Superstition Springs Mall in Mesa. I was given a black Sharpie to use. I questioned the voting judge because my marks bled through. He said it didn’t matter!

From what I have read, marks bleeding through a ballot can matter very much — and even invalidate the ballot.

Then there’s this from @Big_Ern_1 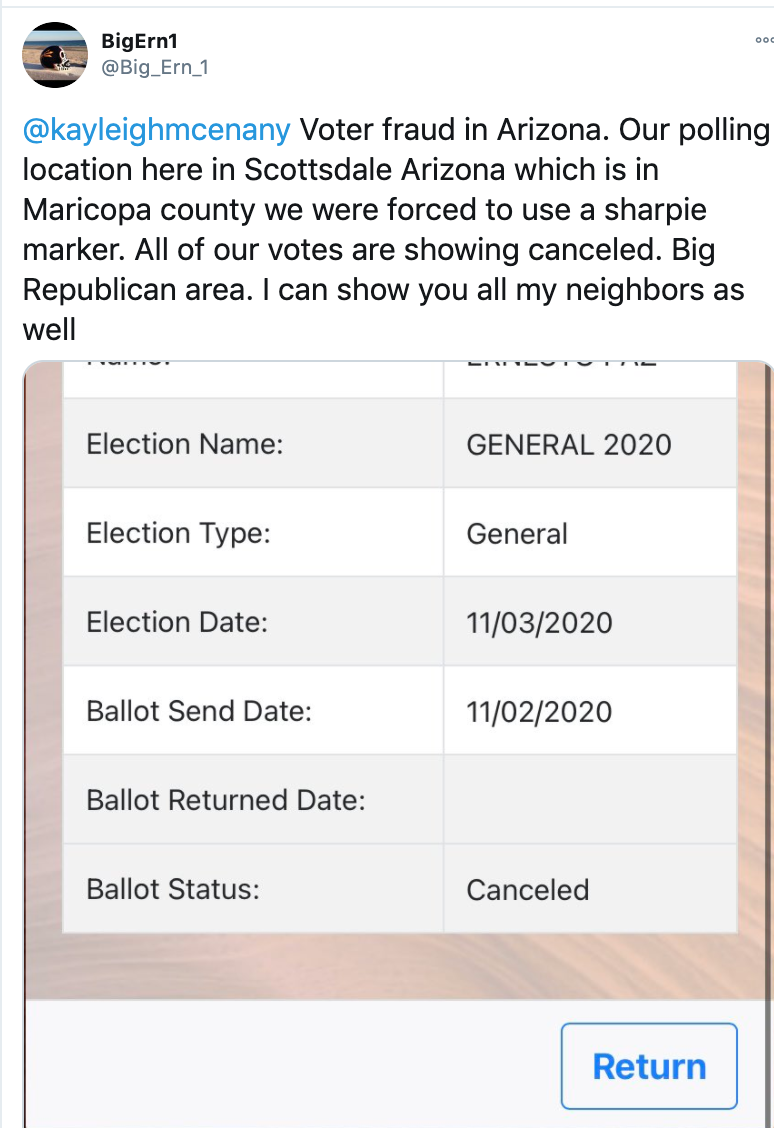 It’s starting to look as if Sharpie votes and spoiled ballots are a larger problem — and a larger fraud — in the 2020 Election than we know. I am still receiving and gathering information on the topic, and have picked up more of these so far blind reports about the problem extending to Michigan. (You can write me at dianawest@verizon.net.)

One day, we might look back on Sharpie votes as the hanging chad of 2020.

And maybe sooner than we thought. 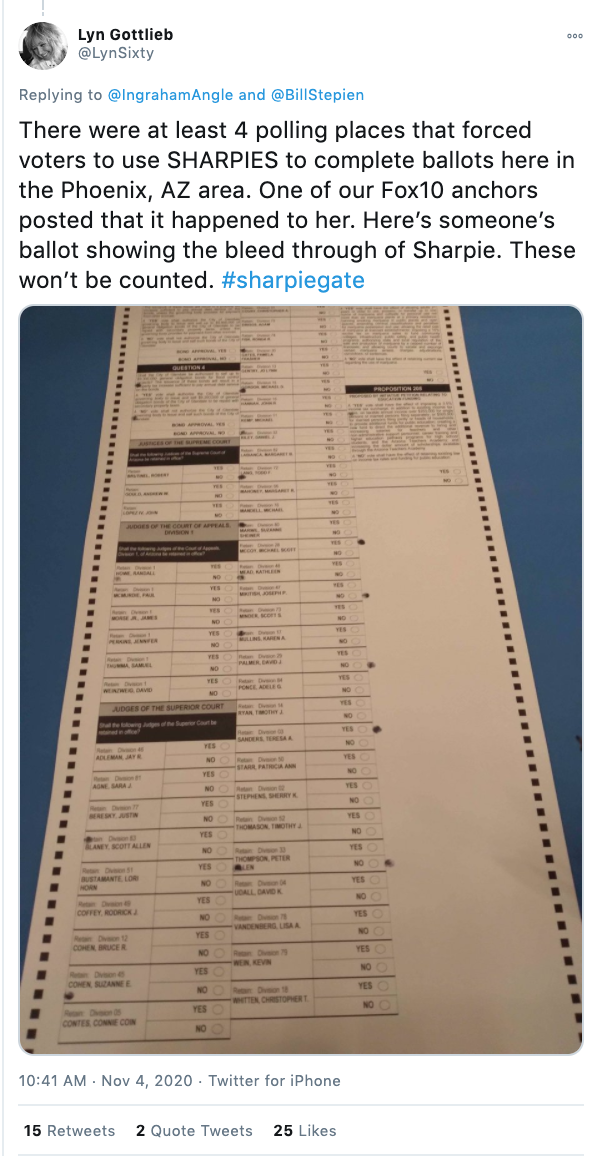 Here is a thread from @ElleinStreiff, who writes

This happened to me in Tempe, Maricopa County at Arizona State University polling location!

I voted at Arizona State University poll location. I was handed my ballot then directed to take a black pen out of a white tub. It was a fine point Sharpie. It gave me pause when I got it.

When filling out my ballot I was concerned about the marker bleeding through to other side. I actually checked backside after filling in a couple bubbles on front.

When I turned it over to make voting selections on backside, every one of the frontside bubbles I marked had bled through. I looked to see if they covered up any backside bubbles or if close to any. They were not.

All others years I have voted at the polls, the markers have been felt tip. Some even attached to the voting booth.

Pens were being returned to white tub on table next to ballot machines.

Also, there was no number counter on the display of the ballot return machine.

Why no counter on the display screen?

I asked the poll worker how do I know my ballot was counted. She said I could go onto the Maricopa County Recorder website and described what to look for on the site, referring to voter dashboard.

I said to her, I thought that was only for mailed in early ballots. She said that no, it will show I voted.

I asked how quickly would my vote recording be updated on the website and show on my dashboard. She replied by saying; “If you mailed in a ballot it’s taking a couple days.”

Then tapping the top of the ballot return machine she finished with; “But since you voted and the machine took it, these should be pretty quick.”

I wasn’t satisfied with what she told me as I wanted to know if the ballot I had just fed into the machine actually counted. She handed me an “I Voted” sticker and I left.

Trump wins Florida, locked in other tight races with Biden

Will a winner be announced tonight?

Voting process continues for more than a month after Election Day! How the state of the race looks just days Read more