The pride Americans feel for their country is slipping away.

There was a time not too long ago when Americans were so patriotic, it was palpable. You couldn’t throw a rock in any direction without hitting someone with stars and stripes in their eyes. There was a near unanimous belief that we were the shining city upon a hill, and that we were and always would be the greatest nation on Earth. While it was mostly found among conservatives, it did cross party lines to some extant. It was so pervasive that anyone who didn’t believe it was pegged an extremist, or just plain weird.

But now? Not so much. The sentiment is still there I suppose, but you can almost feel it evaporating a little bit every day. The pride Americans feel for their country is slipping away, and is now an undeniable fact. ZeroHedge recently posted a poll from the World Values Survey, which reveals the precipitous decline of our national pride. In terms of patriotism, we’ve fallen beneath the likes of Mexico, Rwanda, and Armenia. 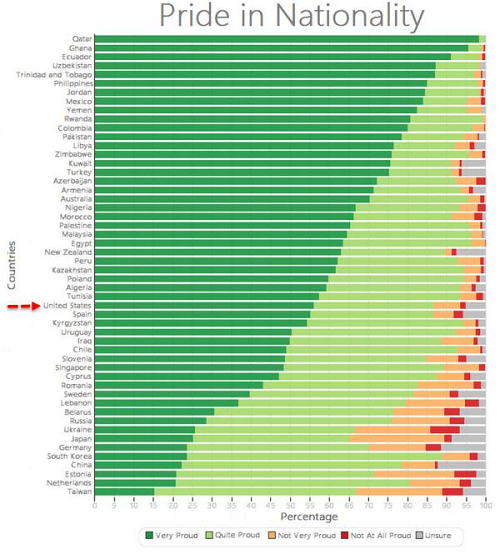 Depending on who you ask, this is either a good thing or a bad thing. I could definitely see this in a negative light. For the percentage of American’s who are “very proud” of their country to drop from 77% to 56% in less than 2 decades, means something awful must have happened during those years.

We’ve seen our nation become mired in numerous conflicts around the world, and we can’t help but notice that our government lied to get us there. We’ve also watched helplessly as our jobs were shipped overseas and our standard of living was decimated. We’ve witnessed the rise of a financial elite who cannot be punished. And finally, the American public is starting to wake up to the fact that they live in the kind police state that previous generations warned them about.

In that respect, our declining national pride is not a good thing. It’s symptomatic of how far we’ve fallen.

At the same time though, I’m seeing this glass half full. Americans have been very naive for a long time. Our government has been rotten to the core for decades, and we’ve been sending our kids to war for the benefit of the banking class and the military-industrial complex, since before those words were invented. It’s hard to say when it happened, but somewhere along the line we became a nation of mostly good people led by narcissistic psychopaths, and it’s been that way for longer than most folks think.

The only difference is that we’re just now realizing it. That small but growing number of Americans who don’t have pride in their nation, are not a bunch of flag burners. They’re awake. They see the system for what it is and they’re not willing to gloss over the crimes of the past or the present. They know that America has a bad seed that’s been growing for generations, strangling what righteous qualities we have left.

So if you’re reading this and you happen to agree, rest assured that you’re not as alone as you think you are. Those of us who have justifiable reasons to lack pride in our nation are not a minority of extremists. We actually love America, or at least, what America was supposed to be. But we know that nation is very nearly gone, and has been replaced with something despicable. We simply see the truth, and that truth is finally spreading far and wide.

Related Posts:
The Most Masked European Countries Have the Biggest Coronavirus Surges

How Trump Changed the World

Matthew Continetti, By defying conventional wisdom on the Middle East and China, he reshaped both political parties. On Sept. 16 Read more

Turkey vs. Greece – here’s why this centuries-old rivalry matters now

California has surpassed New York as the U.S. state with most confirmed Covid-19 infections. The U.S. sealed a pact for Read more